National Event Hire was proud to be a supplier to The Rose of Tralee for their annual Rose Ball and live TV shows with RTE on Monday and Tuesday night. Providing the Rose of Tralee with Tables, Chairs, Crockery, Cutlery, Glassware, Centrepieces and Kitchen Equipment.

The Annual Rose of Tralee Rose Ball is the opening event of a week of celebrations in Tralee, Co. Kerry Ireland. The Rose Ball took place on Friday 19th August 2016 and saw “The Dome” home of the Rose of Tralee International Festival, transformed. This year’s Rose Ball was it largest yet with over 1600 guests in attendance. Guests enjoyed a 5 course Dinner from Brook Food Service.

On Monday & Tuesday, 3000 National Event Hire banqueting chairs were carefully placed by #TeamNEH in advance of the live TV shows. Over the 2 nights we saw all 32 Roses live on television. 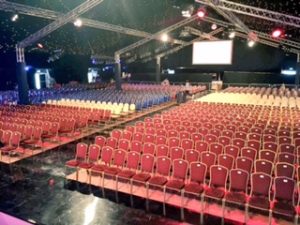 There was record attendance at The Dome for each of the live TV shows and TV ratings were at all time high with records numbers tuning in for crowing of the Rose of Tralee. Chicago Rose, Maggie EcEldowney was crowned 2016 Rose of Tralee 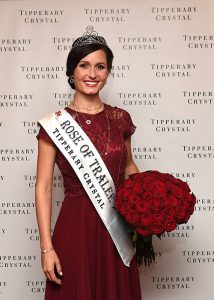 The Rose of Tralee International Festival is an international event which is celebrated among Irish communities all over the world. The Festival, held annually in the town of Tralee in County Kerry, takes its inspiration from a 19th century ballad of the same name about a woman called Mary, who because of her beauty was called “The Rose of Tralee”. The words of the song are credited to C. (or E.) Mordaunt Spencer and the music to Charles William Glover, but a story circulated in connection with the festival claims that the song was written by William Pembroke Mulchinock, a wealthy Protestant, out of love for Mary O’Connor, a poor Catholic maid in service to his parents.